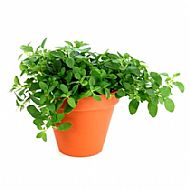 Oregano, which is in fact wild marjoram and is sometimes known as pot marjoram, is a hardy perennial.

Sow: your oregano seeds indoors from March or outdoors from late April/early May, 2cm deep and around 15cm apart, in well drained and fertile soil in a sunny, fairly sheltered site.   Harden off indoor grown seedlings before planting out, around 30cm apart.  Oregano can also be grown in a pot on the patio.  Select a container with good drainage, add grit to the compost, and scatter several seeds on the surface, covering lightly with compost.  Finally, oregano can also be grown successfully as an indoor plant on a south facing window sill.

Tip: oregano is said to discourage cabbage butterfly, so makes a good companion plant for brassicas.

Aftercare: Oregano is very easy to care for.  Water, as required, until established, after which plants will more or less look after themselves and, being of Mediterranean origin, should even be fairly tolerant of drought.  Container grown plants may benefit from a mid season feed of organic liquid fertiliser.

Harvest: leaves in July, just before flowers appear, as leaves harvested flowers have bloomed can have a bitter taste.  Snipping off the flower heads as they form will allow you to continue harvesting small amounts of oregano right through Summer and Autumn.  Oregano can be easily dried by picking stems and hanging in bunches in a warm, dry, shaded spot place until leaves are crisp and crumbly, then storing in an airtight container for up to 6 months.

Oregano is traditionally used in pizzas, pasta dishes and tomato sauces.  It has a fairly strong flavour and should therefore be used sparingly.