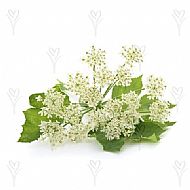 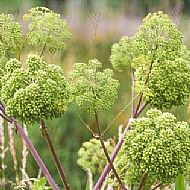 A tall architectural plant with gorgeous flowers and many uses, both culinary; it is a natural sweetener, and medicinal. The seed heads also dry fantastically well. If you have the space, it is most definitely worth adding to your herb garden or flower border. 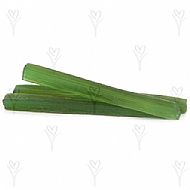 Undoubtedly, the best known use of Angelica is when the stems are candied and used in baking decoration. Candying is a fairly involved process but, with Angelica available less and less on the supermarket shelves, is definitely worthwhile for dedicated bakers.

Angelica is a tall, architectural hardy biennial, suited to providing height in the herb garden. It enjoys a damp position with partial shade. In the first year, it will be bushy in nature, and the fleshy, young roots can be used come the Autumn. It will die back completely over the winter, only to reappear the following Spring, growing rapidly and reaching 1.5 - 2 metres in height. During the second year the hollow stems can be utilised. The plant will flower in either its second or third year, following which the seeds can be harvested. Leaving the odd seedhead will encourage self-seeding as, having flowered, the original plant will die away.

Sow: your angelica seeds direct in Autumn, or in pots/seed trays, lightly covered with a sprinkling of compost or vermiculite, at other times of the year. The seeds should be kept at a temperature of around 5 degrees for the first month (containers can be sealed in a plastic bag and placed in the fridge if necessary) and then transferred to a relatively cool environment, around 16-18 degrees, to encourage germination.

Aftercare: seedlings should be transplanted to their growing position once the first set of true leaves appear with support provided, particularly on exposed sites, as required.

Harvest: fleshy, young roots in the Autumn of the first year, stems early in the second year, flowers once formed and seeds when mature.

Undoubtedly, the best known use of Angelica is when the stems are candied and used in baking decoration; a fairly involved process but, with Angelica available less and less on the supermarket shelves, is definitely worthwhile for dedicated bakers. However, all parts of the plant are edible and have various other culinary uses; leaves, and particularly chopped stems, will sweeten fruits such as apples and rhubard during cooking; stems can be added to oven-baked vegetables at aid caramelisation and both leaves and roots can be used to make a herbal tea.

Angelica is said to have various medicinal properties, including aiding digestion... and dried seedheads are very attractive when displayed in a vase.